As Duncraig Senior High School has seen enormous growth in reputation and size in the past decade, we commenced, in 2019/20, a rebranding process in consultation with staff, students and the wider community to discover and celebrate the Duncraig story.

Amongst some old school papers, the following was discovered;

“The name Duncraig literally means a ‘castle dweller in the rugged rocks’. However, this does not appear to be appropriate for the area. The area, in fact, was part of the stock route used by farmers north of Perth to bring their beef to market. The farmers followed the water holes towards Perth and allowed their cattle to graze and fatten in what is now the Duncraig/Greenwood area. Farmers also frequented the Balcatta Hotel, south of Cockman’s farm while their cattle grazed and wandered through neighbouring market gardens! Much to the annoyance of the market gardeners.

The Duncraig area was owned by the Midland Railway Company at the turn of the century but later passed hands to the Banksia Pastoral Company, a subsidiary of the Sorrento based Estate Development Company who were responsible for the development of the area. The first development took place in 1968 and from the population graph below (not available) it can be seen that Duncraig is one of the fastest growing suburbs in the Wanneroo Shire.”

The Banksia depicted in our logo is believed to be the Firewood Banksia (Banksia menziesii) with the tree seen in the school grounds and surrounding scrublands. The Banksia Woodlands of the Swan Coastal Plain ecological community are now considered endangered and were added in 2016 to the threatened species list under the Environment Protection and Biodiversity Conservation Act 1999. The history of the area and now endangered classification of the Banksia has strengthened our reasons to retain the Banksia as part of our school logo and provided an understanding of the area’s past and reason to preserve the Banksia both in image and ecologically.

Given these discoveries, the outcomes of the strategy became clear. The school continues to hold the Banksia at its heart and the school colours of dark blue and white were to be retained. The brief was to modernise and celebrate the school in its logo and publications, and bringing out the school name so that it is distinct, bold and strong.

Through the consultation process of various groups reviewing the concepts, a story emerged relating to the logo that is now in use.

The logo has retained the blue and white as in previous images. The Banksia has remained front and centre, with two halves, with the left being smaller than the right. The school name is now emboldened and easy to identify. 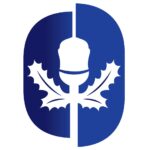 Our logo represents the school and community (Banksia)
supporting the journey our students take while at Duncraig SHS,
from children commencing their high school education to graduating as young adults,
experiencing personal growth and being emotionally and academically ready to fulfil their potential.